One of the best places to move to in the U.S 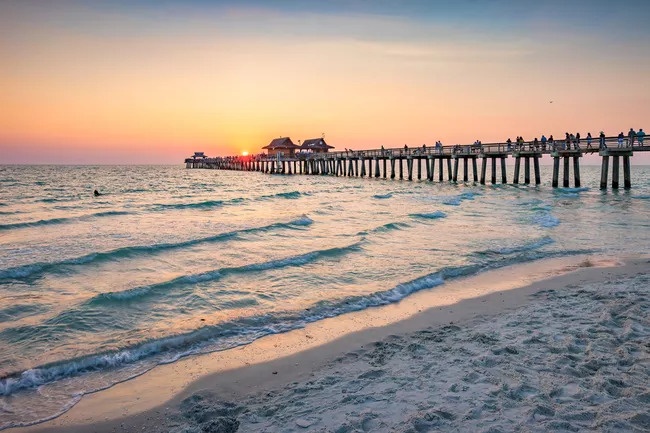 This Florida Coastal City Is One of the Best Places to Move in the U.S. — Here's Why

Spoilers, it's not Miami.

Naples has always been popular with vacationers and second home buyers seeking a fun, family-friendly environment to escape to in the Sunshine State. Known for its dreamy, white-sand beaches and world-class golf courses, this Gulf of Mexico city is also emerging as a major luxury destination in which to invest and live. The city has been part of the Blue Zones Project since 2015, which works to make communities across the country healthier and happier. Since then, East Naples has had the most significant improvement in Southwest Florida, up 6.7% since the project started.

"Once you move to Naples, you can take 10 years off your age," Ardel McKenna, real estate associate at Coldwell Banker, joked, pointing out some of the city's major recreational draws such as sailing, fishing, and almost 90 golf courses. "If you want to be outdoors, it's the best place in the world because it's always sunny."

And with more people working remotely than ever, Naples has quickly become the primary home of many urbanites relocating from cities such as Chicago and New York City. In fact, it now holds the title of the safest place to live, according to a recent U.S. News survey, and is one of the fastest-growing cities in the country, attracting not just retirees but also younger couples. In 2021, Naples had the most home sales per capita of all mid-size markets in the U.S., and the average home price jumped a whopping $200,000 year-over-year (more than 30%). In June 2022, the median home price in the city was $739,000. "Our average buyer is now 42 years old. [Naples] is very vibrant. It has restaurants, nightlife, and a lot of fun things. There is always something new on the horizon in Naples," Dawn McKenna, a Coldwell Banker broker specializing in luxury real estate, told T+L. "I would say we are probably closest from a real estate perspective to Palm Beach. The difference is Palm Beach Island is — like all of Naples — walkable. But Palm Beach Island is very small, so when you go out to West Palm Beach, it gets very dense. Naples is a little bigger and doesn't have that."

Lower density is just one factor that makes Naples a more attractive destination than traditional luxury markets such as Miami or Palm Beach. Naples Municipal Airport (APF) is just a 10-minute drive from the city's downtown and caters to private and chartered flights (in 2020, it was one of only three private airports countrywide that saw an uptick in activity). Naples's 5th Avenue South and Waterside Shops are home to some of the best designer shopping, and new luxury developments are popping up all over town.

Four Seasons is making its debut on the Gulf Coast with Naples Beach Club, a Four Seasons Resort, a sprawling 125-acre community that will consist of a 216-room hotel and 185 luxury residences. The property, designed by Hart Howerton with interiors by Champalimaud Design, is projected to open in 2024. Kalea Bay, five high-rise towers in North Naples offering gorgeous Gulf of Mexico views, an open-air gym, several pools, and tennis courts, among many other amenities, features three- and four-bedroom fully furnished residences. Most of the Kalea Bay condos have been sold for two years, and residents will finally move in this fall. In May, Rosewood Hotels & Resorts announced it is building its second Rosewood Residences property in Florida in the heart of Naples. The 50-unit development will boast 500 feet of beachfront, ocean views, and concierge amenities. The three- and four-bedroom residences have an average indoor size of 5,300 square feet each and will feature their own private elevator entries, spacious balconies, large walk-in closets, and custom kitchens.

House sales in the area are also booming. Last month, a 16,000-square-foot beachfront home sold for $62 million, making it Naples's most expensive single-family residence and beating the previous big-ticket record by $10 million. Some of the buzziest neighborhoods in the city right now are Port Royal, Old Naples, and Aqualane Shores.

"The demand [for real estate] in Naples never goes away," Ardel McKenna concluded. "It's getting bigger. The rise in interest rates or the stock market leveling off is never going to diminish the demand to be in Naples."