Is Your Home Ready for Extreme Weather? 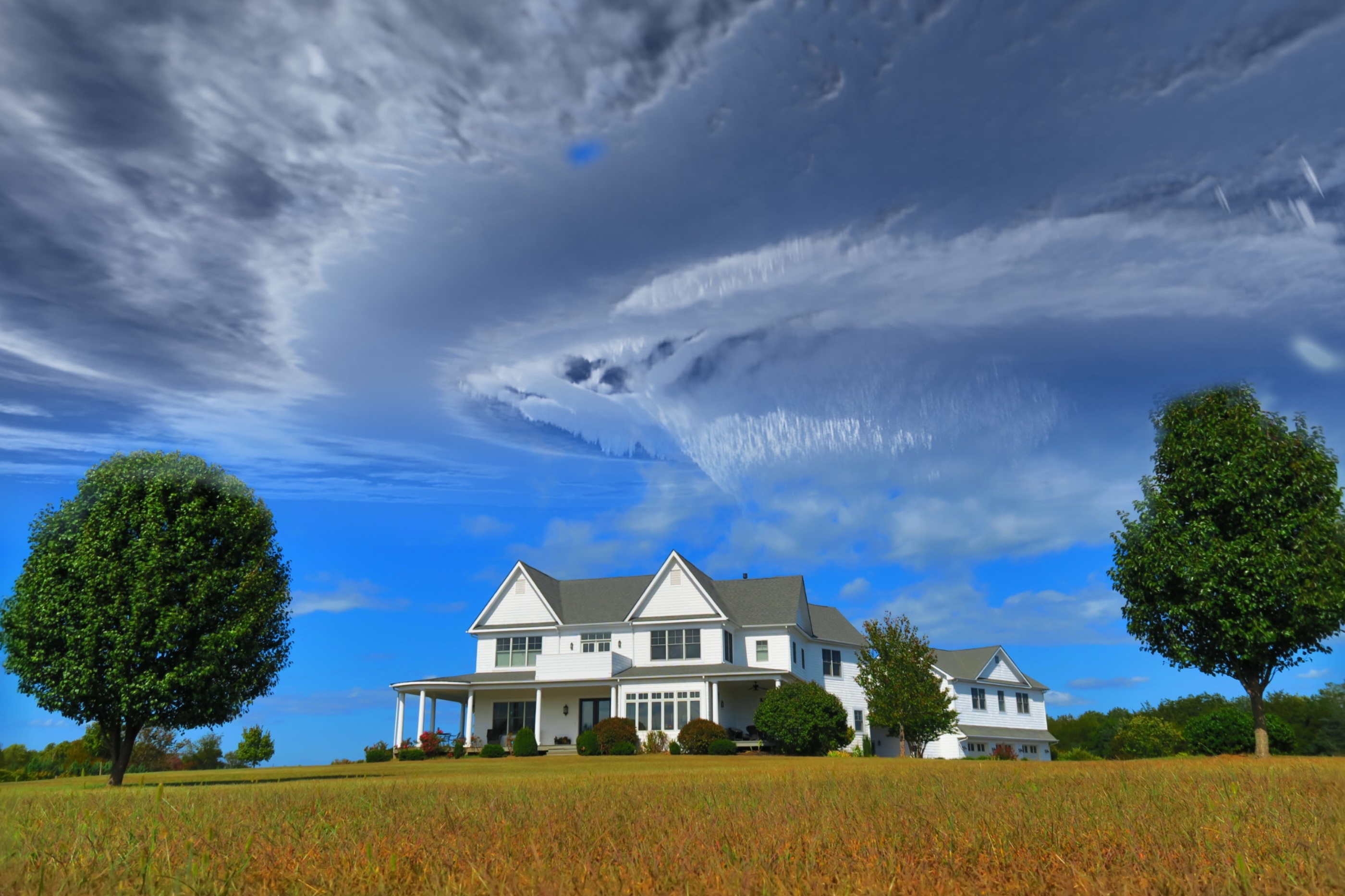 Hurricanes. Heat waves. Earthquakes. Tornadoes. Today’s headlines are awash in extreme weather, and whether you blame climate change or just plain bad luck, the simple truth is that the damage from these disasters is impossible to ignore.

According to the National Oceanic and Atmospheric Administration, the United States experienced 22 separate billion-dollar weather and climate disasters in 2020, totaling around $95 billion in damages.

And more trouble may be brewing, as our country’s six-month hurricane season peaks in September, followed by winter’s plummeting temperatures leading to blizzards, hail, and other dangers. Even Southern areas are no longer immune, as was made clear in February 2021 when Winter Storm Uri overwhelmed Texas power grids and inflicted losses estimated at $10 billion to $20 billion.

While no climate expert or weather forecast can divine exactly what will unfold in the coming months, one thing all Americans can do to protect themselves and their home is have a solid homeowners insurance policy. But how prepared are we on this front?

To find out, Realtor.com® teamed up with HarrisX to conduct a poll of 3,026 adults on their extreme weather concerns and homeowners insurance know-how—and the results suggest that many Americans may be more vulnerable than we think.

Here are some of the key highlights:

* The natural disasters homeowners are most worried about are tornadoes (39%), severe winter storms and cold weather (38%), floods (35%), and hurricanes (29%). To a lesser degree, they’re also concerned with earthquakes (21%), wildfires (17%), and droughts (11%).
* All that said, only 52% of American homeowners took natural disasters into account when choosing the location of their current home.
* Just over half (56%) of homeowners knew what to look for in their homeowners insurance policy when buying their home, with 15% admitting they had no clue what to check. Meanwhile, almost one-third (29%) said they thought they knew what to look for, but learned a lot they didn’t know while buying insurance.
* The youngest generation is the least likely to understand homeowners insurance: only 39% of Gen Z said they knew what to look for in their policy when buying a home, compared with 58% of Millennials, 58% of Gen X, and 57% of baby boomers.

In short, these survey results suggest that while many Americans might assume their home insurance will foot the bill for any extreme weather–related damages that come their way, they could be in for a rude awakening if disaster strikes.

To help clear up some common misconceptions about homeowners insurance, here’s a rundown of some extreme weather occurrences and what most home insurance policies will cover—and won’t cover—so homeowners are truly prepared for whatever happens.

Does home insurance cover floods?
Flooding is the most common natural disaster in the United States, according to CoreLogic. And if you think you don’t need flood insurance, keep in mind that more than 20% of insurance claims happen in non-flood zones.

Yet currently, only 12% of Americans have flood insurance. And while you might assume your standard home insurance policy covers floods, the reality is that it doesn’t. Instead, you’ll have to obtain separate flood coverage.

“Flood insurance must be purchased separately through the National Flood Insurance Program, or through a private flood insurer,” says Ted Olsen, managing director at New York’s Goosehead Insurance. (The program defines flooding as “an excess of water on land that is normally dry, affecting two or more acres of land or two or more properties.”)

Since flooding is not typically covered, it’s essential to know a home’s flood risk to weigh whether purchasing additional insurance is merited.

Coverage will also hinge on you doing your own due diligence to keep your house from flooding—namely by maintaining proper grading, where the ground around your house slopes downward and away from your foundation to keep water seeping outward rather than in.

“A flood insurance policy won’t cover you if your home floods due to improper grading around the home,” adds Olsen.

You can hire a landscaper to regrade your land, which usually costs between $969 and $3,000, according to HomeAdvisor. It’s a small price to pay to keep your house high and dry.

Does home insurance cover wind damage and tornadoes?
If a tornado, hurricane, or windstorm tears through your area, any wind-related damage to your home (e.g., ripped off shingles and siding) is typically covered under a standard insurance policy. But there are exceptions.

“In tornado-prone areas, there is often a separate higher deductible for wind damage,” says Olsen. And if you live in “tornado alley” (which includes parts of Texas, Oklahoma, Iowa, Kansas, and Nebraska) or another area that consistently experiences frequent tornadoes, you may need additional coverage for high wind damage. Some insurers even require an additional windstorm rider and separate deductible if you live near coastal areas that are vulnerable to tropical storms.

The goal of your homeowners insurance policy and additional coverage is to make sure you’re covered not only for minor damage, but also in case your home is completely destroyed and needs to be rebuilt. This is known as “actual total loss” or “total loss.”

Total loss coverage varies from area to area as well as from home to home, but it basically boils down to an estimate of how much it would cost to rebuild your home.

That could cost more than you paid for your house, or less—it all depends on the construction costs in your area. Be sure to check your policy to see what’s covered. Total loss coverage is pricier, but if you don’t have it, you’ll be on the hook for all the building costs not covered by your policy.

Does home insurance cover hurricanes?
Hurricanes inflict damage in one of two ways: wind and water. Damage from wind is typically covered in standard policies, although your insurer may put in place a separate higher deductible for hurricane-related wind damage.

Meanwhile, flooding caused by hurricanes is typically not covered by a standard homeowners insurance policy (as noted above), so if your property is at risk for flooding, you’ll have to purchase additional flood insurance.

Does home insurance cover wildfires?
In 2020, a large chunk of the damage coming from weather was due to a record-breaking U.S. wildfire season that burned more than 10.2 million acres. And this year is already looking worse. Twelve of the most destructive wildfires in California history took place in September and October, according to the California Department of Forestry & Fire Protection.

The good news to all this bad?

“All home insurance policies include fire as a covered peril,” says Alan Umaly, president of California’s Westwood Insurance Agency. “This means your home and belongings that are damaged in a wildfire will be covered.”

However, if you live in an area with a particularly high risk for wildfires, be warned that the increase of wildfires has prompted some insurance companies to forgo renewing even loyal policyholders because of the risk. Even if your insurer does offer wildfire coverage, it may not cover the total cost of rebuilding a home. Instead, it may cover just the loss of your personal property, some of the costs of rebuilding a home, and living expenses while your home is being repaired.

Does home insurance cover damage from cold weather and snow?
Most home policies include coverage for a frozen pipe that breaks due to a snowstorm, as long as you maintain proper temperatures in the home. In other words, if you leave for a monthlong winter vacation and turn off your heat, a pipe that freezes and bursts as a result of this negligence is on you to fix.

And if ice or snow causes a tree to fall on your home, most insurance companies will pay to have the tree moved from the house and for home repair, says Josh Thorner, agency manager with Country Financial in Portland, OR.

This falls under a “covered peril,” which is standard in most home insurance policies, and typically includes fire, lightning, wind, and ice.

Does home insurance cover damage from hail?
Yes, but “in areas where hail damage is prevalent, you will typically see some larger deductibles,” says Olsen.

So keep an eye out for home policies that are less expensive, but only because the wind and hail deductible is high—and consider purchasing higher-priced insurance with a lower deductible for hail if it’s common in your area.

Also note that a home’s roof, in particular, is the most susceptible to hail damage, and frequent roof replacements in hail-prone areas are what causes higher premiums.

“The only way to protect against this natural disaster is to secure a specialty earthquake insurance policy,” says Umaly.

If you live in California, your insurance company is required under law to sell you earthquake insurance. But even if you have earthquake coverage, there are limits on what it pays out.